“The rules of engagement were never so scandalous. . .

A rumored pirate and the scurrilous black sheep of his well-to- do family, Cade Cavendish relishes his world of rebellion, deception, and seduction. Nothing and no one can hold him to be the duty-bound, honorable man he is expected to be. But when an unexpected run-in at his twin brother’s estate with a ravishing, raven-haired maid leads her to believe he’s actually a viscount, Cade’s renegade life is thrown wildly off-kilter. And even though a case of mistaken identity can be quickly set to rights, matters of the heart are quite different…

Miss Danielle LaCrosse is startled to learn that the handsome gentleman who radiates sin and has the devil in his eyes is not her employer the Viscount, but rather his infamous brother. A former heiress, orphaned and left penniless, Danielle has more than a few secrets of her own. Cade may be skilled at coaxing even the most hidden desires out of Danielle but can he earn her trust–and win her heart–as they embark on an adventure to confront a dangerous enemy from both of their pasts . . . and uncover the identity of the so-called Black Fox along the way?

I can’t get enough of Valerie Bowman’s romances! This one was no different. While not my favorite of the Playful Brides series, I still adored this novel.

There was a twist in this novel that revealed my own implicit bias.  I appreciate that I was wrong, and it makes this novel better. I don’t want to reveal where my bias came in because it would ruin the entire novel, so I won’t.

I’m not sure if it was my mentality when I was reading it, or just how drawn out this story was (because I was busy), but I did experience a lull during this story where I was losing interest. The ending definitely fixed that for me because it has a lot more adventure.

Overall, this was a great story, not the couple I was expecting for novel #7, but a great one none-the-less. 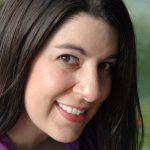 Valerie grew up in Illinois with six sisters (she’s number seven) and a huge supply of historical romance novels. After a cold and snowy stint earning a degree in English Language and Literature with a minor in history at Smith College, she moved to Florida the first chance she got. Valerie now lives in Jacksonville with her family including her rascally dogs. When she’s not writing, she keeps busy reading, traveling, or vacillating between watching crazy reality TV and PBS.

Visit Valerie on the web at www.ValerieBowmanBooks.com.”

I received a copy of this novel from the publisher via Netgalley, in exchange for an honest review.