Honestly, the main thing that lead me to these books were the pretty dresses. The elegance of them made me think of the Luxe series (found here). Being a sucker for pretty dresses, I purchased the first book. While not intellectually stimulating, these novels were addicting. As a background for all three books, it is a dystopian series based in The United States, which had been renamed Illéa. The government instituted a caste system (somewhat similar to the Hunger Games system). In this system the castes range from Eight, the lowest, to One, the highest. Ones are royalty and Eights are typically homeless people. To learn more about the various castes you can go here. Now onto these books.

For thirty-five girls, the Selection is the chance of a lifetime. The opportunity to escape the life laid out for them since birth. To be swept up in a world of glittering gowns and priceless jewels. To live in a palace and compete for the heart of gorgeous Prince Maxon.
But for America Singer, being Selected is a nightmare. It means turning her back on her secret love with Aspen, who is a caste below her. Leaving her home to enter a fierce competition for a crown she doesn’t want. Living in a palace that is constantly threatened by violent rebel attacks.
Then America meets Prince Maxon. Gradually, she starts to question all the plans she’s made for herself–and realizes that the life she’s always dreamed of may not compare to a future she never imagined.

The first book in the series, “The Selection” jumps straight into the plot without any preliminary background info, causing the reader to have to just go along with the story to learn more about the society it is based in. This was confusing to me in the beginning because I was eager to figure out how the government was organized. Despite that initial confusion the story was intriguing, kind of like Cinderella going to the ball to try to win the eyes of the Prince combined with reality television shows like “the Bachelor” (which I’ve never actually seen, because I despise reality television). One thing that bothered me about America was that she did not trust people. There were many angsty moments that could have been avoided had she just trusted in Maxon. Overall I’ve granted this novel 4.5 stars because it was captivating enough, that I did not want to put the book down.

The Selection began with thirty-five girls.
Now with the group narrowed down to the six Elite, the competition to win Prince Maxon’s heart is fiercer than ever—and America is still struggling to decide where her heart truly lies. Is it with Maxon, who could make her life a fairy tale? Or with her first love, Aspen?
America is desperate for more time. But the rest of the Elite know exactly what they want—and America’s chance to choose is about to slip away.

After finishing the first book I was eager for more. This caused me to impulse buy “The Elite” and “The One” which I resultantly devoured in less than two days. “The Elite” seamlessly flowed from the first book. Picking up right where the first ended, Maxon, the prince, has narrowed down his choices to six girls. This book focuses more on america’s family and interactions with Maxon and the other girls. This book was a quick read, I think it only took me about a day to read. I felt that it also is worthy of 4.5 stars because of its interesting plot. 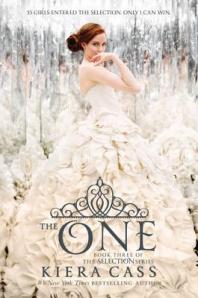 The time has come for one winner to be crowned.
When she was chosen to compete in the Selection, America never dreamed she would find herself anywhere close to the crown—or to Prince Maxon’s heart. But as the end of the competition approaches, and the threats outside the palace walls grow more vicious, America realizes just how much she stands to lose—and how hard she’ll have to fight for the future she wants.

Despite its lower rating of only 4 stars, this novel held the turning point for our protagonist, America. She comes to realize who she is and what she truly believes in. Her inquisitive nature allows her to investigate what her country is truly built on. Because of that, I liked this end to America’s saga. It’s pretty obvious that she will be chosen as the One, which is part of the reason it ranks lower for me.

When I started this series, I was under the impression that it is just a trilogy, but I turned out to be wrong. I recently found out that next year, May I believe, a fourth book will be released titled “The Heirs.” The next book in the series will be based around the children of the protagonists of this book. I’m glad that the next novel will have a new protagonist because these three novels concluded America and Maxon’s beginning completely. I feel that if another novel was written about them, it would just be fluff and be excessive.